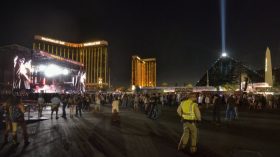 In Las Vegas Sunday night, a gunman on the 32nd floor of the Mandalay Bay hotel used many, many automatic weapons to rain fire on 22,000 fans gathered at a country music festival in an attack that left 58 people dead (to date) and more than 500 injured. It was, by all accounts, a scene of unmitigated horror and carnage, and our hearts go out to the victims and their families. What makes it arguably even more painful is that we currently have no idea — literally no idea — as to why he did it. The gunman killed himself before police could reach him, and unlike other such mass killings, he didn’t leave any kind of manifesto or make any statements that would give a clue to his motive. And the ongoing investigation hasn’t turned up any evidence (that they’ve disclosed, at least) indicating why.

That hasn’t stopped people from speculating, of course. People have speculated about domestic terrorism (with the accompanying discussions of how that is defined and why it would be or not be applied to this specific gunman). ISIS has taken credit for it, of course, because they take credit for essentially every act of this kind, although there’s currently no evidence of any connection to them. And, of course, there’s speculation about mental illness — both of the more formal “we have to do something about this! Mental healthcare!” variety and the throwaway “deranged” “snapped” “maniac” “crazy, insane nut” rhetoric from news media, public officials, law enforcement officials, and people on the ground but rarely, interestingly enough, from public health professionals.

Usually, it arises during discussions of gun control — that this is actually an issue of mental health. (Curiously, this seems to be the only time that public officials and commentators really care about mental health, and the subject is generally once again abandoned over time. It never comes up during, for instance, the health insurance debate, or cuts to public health funding.)

The statistic is brought up over and over (frequently to be dismissed by people insisting that this situation is different): People with mental illnesses are vastly more likely to be the victims of violence than the perpetrators of it. The automatic conflation of violent, aberrant behavior with mental illness based entirely on social standards, without any medical diagnosis, contributes to the stigma against people with mental illnesses. It makes them more likely to feel shame and self-hatred about something they can’t control. It makes people in crisis less likely to come forward and seek help they desperately need. And when they do come forward and open up about what they’re experiencing, it frequently makes society treat them differently, as if they’re a ticking time bomb and not a person who needs both healthcare and understanding as much as any other person with any other illness.

People with mental illnesses don’t need the knee-jerk assessments of mental healthcare that are based on the idea that they’re mass murderers. They certainly don’t need changes to healthcare (on the rare occasion that they ever occur) that focus solely on the minority of people who are prone to violence — and thus a danger to the general public — and ignore the vast majority of people who are suffering and need support but are only a threat to themselves. When people with mental illnesses are used as a political pawn and a scapegoat, they never get help, and nothing ever changes.

Uncertainty is scary. The unknown is scary. That’s one reason that we’re so quick to speculate in situations like this — we’re searching for some explanation, no matter how unsupported by currently available evidence, to give us a grounding point in a time of chaos. Maybe this man was a white supremacist. Maybe he was radicalized by ISIS. Or maybe he was mentally ill. But that feeling of comfort comes entirely from a story we’ve dreamed up in our head. Again, uncertainty is scary, but when the alternative could do real damage to an innocent community, the only safe path is to accept the uncertainty and be willing to live with it until the facts are known.

Also scary is the thought that a person capable of such atrocity could be a lot like “normal people” — that there isn’t any kind of physiological difference that would make him like him and them like them. That he’s engaging in such aberrant, violent behavior means he must be mentally ill, as evidenced by the fact that he’s engaging in such aberrant, violent behavior (“no true sane person”?) and that it could be attributed only to “insane” “derangement.” We have nothing in common. He’s something provably different. (I’m not going to get into any discussion of the existence of evil, and thus of evil people, which is far beyond the scope of current circumstances.) Again, it’s comforting, but assuming without evidence that the inherent difference is mental illness does a great disservice to people who actually have it.

We know essentially nothing about the man who killed more than 50 people and wounded hundreds of others in Las Vegas. More evidence is turning up all the time as the authorities continue their investigation, going to his house, talking to his loved ones, going through his browser history. None of it, as yet, has given any clue to his motive. He was rich. He had lots and lots of guns. He gambled a lot. He wasn’t terribly religious. He sent cookies to his mother. Plenty of what, a little bit of how, and no why. The investigation may uncover evidence of diagnosed mental illness of the type that can be directly and causally connected to this kind of violence. An autopsy could reveal telling physiological signs. Or it could uncover none of those things. It certainly hasn’t yet.

Leave mental health out it of unless/until evidence exists that it should be brought in. Stop using mental health as an excuse to ignore and not address other factors. Stop using people with mental illnesses as pawns until you’re done making your point, and then discarding them. Stop falling back on ableist language to describe things you don’t understand. Stop seeking emotional comfort for yourself to the detriment of people with mental illnesses. We have enough to handle in our everyday life without having to shoulder the stigma of violence and the weight of a mass murder.

3 thoughts on The Las Vegas shooting was a tragedy. That doesn’t mean mental illness is at fault.