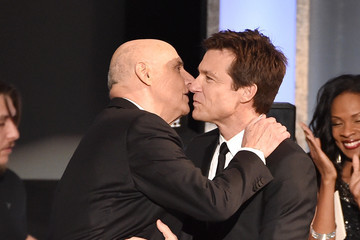 I think it was kind of nice how Jason Bateman repeatedly came to Jessica Walter’s defense as she talked about the verbal abuse she suffered from Jeffrey Tambor on the set of “Arrested Development.”

Wait, no, it was Tambor. He was defending Tambor. Many-times-accused-of-verbal-and-even-sexual-abuse Jeffrey Tambor. Hand-waving Tambor’s behavior as just something that people do in the industry, even as Walter, who has been working in said industry longer than Bateman has been alive, says she’s never experienced anything like that before. Just defending the hell out of Tambor.

From the Hollywood Reporter interview, you talked about how you yelled at directors, assistant directors, the “Transparent” creator Jill Soloway. You even said at one point you lashed out at —

BATEMAN Which we’ve all done, by the way.

BATEMAN Not to belittle what happened.

BATEMAN But this is a family and families, you know, have love, laughter, arguments — again, not to belittle it, but a lot of stuff happens in 15 years. I know nothing about “Transparent” but I do know a lot about “Arrested Development.” And I can say that no matter what anybody in this room has ever done — and we’ve all done a lot, with each other, for each other, against each other — I wouldn’t trade it for the world and I have zero complaints.

(Oh, Bateman has zero complaints. Well, that makes it all better, then.)

TAMBOR And I have, and am continuing to do. And I profusely have apologized. Ms. Walter is indeed a walking acting lesson. And on “Transparent,” you know, I had a temper and I yelled at people and I hurt people’s feelings. And that’s unconscionable, and I’m working on it and I’m going to put that behind me, and I love acting.

BATEMAN Again, not to belittle it or excuse it or anything, but in the entertainment industry it is incredibly common to have people who are, in quotes, “difficult.” And when you’re in a privileged position to hire people, or have an influence in who does get hired, you make phone calls. And you say, “Hey, so I’ve heard X about person Y, tell me about that.” And what you learn is context. And you learn about character and you learn about work habits, work ethics, and you start to understand. Because it’s a very amorphous process, this sort of [expletive] that we do, you know, making up fake life. It’s a weird thing, and it is a breeding ground for atypical behavior and certain people have certain processes.

SHAWKAT But that doesn’t mean it’s acceptable. And the point is that things are changing, and people need to respect each other differently.

WALTER [THROUGH TEARS] Let me just say one thing that I just realized in this conversation. I have to let go of being angry at him. He never crossed the line on our show, with any, you know, sexual whatever. Verbally, yes, he harassed me, but he did apologize. I have to let it go. [Turns to Tambor.] And I have to give you a chance to, you know, for us to be friends again.

WALTER But it’s hard because honestly — Jason says this happens all the time. In like almost 60 years of working, I’ve never had anybody yell at me like that on a set. And it’s hard to deal with, but I’m over it now. I just let it go right here, for The New York Times.

(No, not belittling at all.)

HALE But I will say, to Jason’s point, we can be honest about the fact that — and not to build a thing — we’ve all had moments.

HALE Not like that. But I’m saying we’ve worked together 15 years, there has been other points of anger coming out.

BATEMAN Exactly. Again, there is context. What we do for a living is not normal, and therefore the process is not normal sometimes, and to expect it to be normal is to not understand what happens on set. Again, not to excuse it, Alia, but to be surprised by people having a wobbly route to their goal, their process — it’s very rarely predictable. All I can say, personally, is I have never learned more from an actor that I’ve worked with than Jeffrey Tambor. And I consider him one of my favorite, most valued people in my life.

CROSS I agree with everybody. And I think it’s important to note — and it hasn’t been noted — that this kind of behavior that’s being described, it didn’t just come out of the blue. It wasn’t zero to 60. There is a cumulative effect sometimes.

BATEMAN You have different people’s processes that converge and collide at times. So Jeffrey is not just popping off, coming out of his car and some unhinged guy.

BATEMAN Not to say that you know, you [Walter] had it coming. But this is not in a vacuum — families come together and certain dynamics collide and clash every once in a while. And there’s all kinds of things that go into the stew so it’s a little narrow to single that one particular thing that is getting attention from our show.

So that adds up to… all of it. All of the times.

Fun fact: Jessica Walter is under no obligation whatsoever to let go of being angry or give Tambor a chance to be friends again. Even if he “profusely [has] apologized,” and even if he’s “working on it,” and even if he’s “learned from the experience and he’s listening and learning and growing.” Because fuck Jeffrey Tambor. And fuck Jason Bateman, too.

Bateman has apologized in a series of tweets in which he says it only sounds like he was excusing Jeffrey, but he doesn’t (but he totally was), it only sounds like he was being insensitive to Walter but he isn’t (and Jesus, he totally was), that he’s horrified that he wasn’t more aware of how the incident affected her (even though she was telling him right there, to his face, the whole time, and if he had actually listened to her instead of running his mouth, he would have been, like, wow, I just learned new stuff and now realize I’m really not qualified to speak on this), and that this is a big learning moment for him (so that’s great, at least something good is coming out of it, right?).