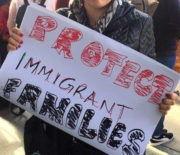 One of the biggest stories currently under discussion is the Department of Health and Human Services allegedly losing track of nearly 1,500 immigrant children placed with host families. In many cases, the story is that the Trump administration has separated those 1,500 children from their families at the U.S. border and lost track of them.

(I will, of course, encourage you to take it all with a grain of salt, because while Rice is an attorney who works in criminal justice [verified], she says her comments are backed by friends of hers who are immigration attorneys [unverifiable], but a lot of the information provided is independently verifiable [verifiable]. So on Feministe’s Plausibility Scale, this thread gets a 4: Sounds Legit.)

Now that we’re all on twitter because of this game, I am making a public service announcement: PLEASE STOP SHARING THAT STORY ABOUT 1500 KIDS MISSING. The outrage I’ve seen is a result of a total misinterpretation and could SERIOUSLY threaten the children you want to save.

Rice’s Twitter thread (and other sources) essentially divides the children in question into two distinct categories:

1. Children placed with families by ORR

These children actually did come into the country as unaccompanied minors and were thus put in the care of the Office of Refugee Resettlement. The ORR’s job is to find (and vet) a home for those minors (immediate family, extended family, or someone with whom the child has an existing relationship, or else they stay in a shelter under ORR’s care), at which point they are no longer under the authority of ORR. ORR doesn’t continue to track them because that’s not within their purview. (And if you think about it, “and then the immigrant was relentlessly monitored by the Trump administration” isn’t a sentence that should make anyone comfortable.) Once a child has been placed, if any abuse or other bad acting occurs, it’s handled through local agencies like any other child abuse, because the children are essentially treated like any other children.

It was discovered in 2014 that ORR had released eight children to a child trafficker instead of family members. As a result of that, ORR tightened their restrictions for confirming the identity family members approved to accept unaccompanied minors.

So when HHS recently called around to check up on the children, they weren’t able to get in touch with 1,475 families, so those kids were declared lost (or “lost track of,” at least), even though it could have just been an out-of-date phone number or a person who just didn’t want to answer the phone for HHS. (Again: say “and then the immigrant was relentlessly monitored by the Trump administration” without cringing.)

(For a differing view, see Michelle Brané, director of the Migrant Rights and Justice program at the Women’s Refugee Commission and an expert on immigration detention. For a non-differing view, see The New York Times and Quartz.)

2. Children separated from their parents under Trump’s new policy and declared unaccompanied

These children aren’t unaccompanied in the traditional sense — they arrive accompanied, and then ICE rips away their accompaniment and says, “Gosh, looks unaccompanied to me!” It’s like the immigration version of a cop pulling you over, smashing your taillight, and then giving you a ticket for a taillight violation. Except instead of a traffic ticket, this is actual children torn from their parents and traumatized at the border because ICE thinks immigrant children are just a tool for punishing their parents.

According to the ORR, more than 700 children have been separated at the border, including more than 100 under age 4. While HHS swears it isn’t done as a deterrent, then-DHS Secretary John Kelly said in March of 2017, “In order to deter more movement along this terribly dangerous network, I am considering exactly that.” And the Trump administration recently announced that it will be ramping up prosecutions and separating children from their families.

Once a child has entered the shelter system, there is no firm process to determine whether they have been separated from someone who was legitimately their parent, or for reuniting parents and children who had been mistakenly separated, said a Border Patrol official, who was not authorized to discuss the agency’s policies publicly.

Now, who else opposes Trump’s horrible policy separating children from their parents at the border?

Put pressure on the Democrats to end the horrible law that separates children from there parents once they cross the Border into the U.S. Catch and Release, Lottery and Chain must also go with it and we MUST continue building the WALL! DEMOCRATS ARE PROTECTING MS-13 THUGS.

“Lost” children: maybe a little, arguably not so much. Forcibly removing children from their parents at the border as a deterrent, potentially never to be reunited again: heartbreakingly yes. Hey, I said we’d provide nuance and detail on this topic. I never said it wouldn’t be entirely awful.

3 thoughts on Lost (“lost”?) children and families torn apart at the border