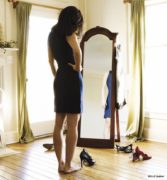 I walked into the room with a confidence that would have been alluring on a more attractive woman but, unrelentingly average as I am, could only be read as arrogance. My oversized tank top skimmed over breast-shaped breasts, hiding feminine curves that still have to be mentioned even though you couldn’t even see them. I wore tight pants that said “workout,” stretched over a generous ass that said “work me out,” and he might have been tempted to take me up on my unmistakable offer had I not been, tragically, in my late thirties. Above my neck, there were other body parts.

Young adult writer Gwen C. Katz has presented us with a tale that can be appreciated by readers of all ages: a male author claiming that men can write female protagonists just as well as any woman, meaning that diversity in publishing is hardly necessary. His evidence? His own writing, of course. Katz generously provides a sample of said prose, demonstrating his undeniable skill at writing from a woman’s perspective. Because women spend so much time walking around and waxing poetic about the shape of their own ass and the extreme tightness of their pants.

A male author is insisting that he is living proof that it's possible for a male author to write an authentic female protagonist.

Here's a quote from his first page. pic.twitter.com/f6d5bN2EHq

The actual copy from the book, for those who need it:

I sauntered over, certain he noticed me. I’m hard to miss, I’d like to think — a little tall (but not too tall), a nice set of curves if I do say so myself, pants so impossibly tight that if I had had a credit card in my back pocket you could read the expiration date. The rest of my outfit wasn’t that remarkable, just a few old things I had lying around. You know how it is.

(Said protagonist later noted that she had “red lips like [she] had just devoured a cherry popsicle covered in gloss,” and seriously, who would do that? Why would someone cover a popsicle in gloss in the first place, and who would then look at it and want to eat it? Dude can’t even write human protagonists.)

While assuring us that men truly are capable of writing realistic female protagonists, Katz also provides a series of cringeworthy excerpts, courtesy of our self-proclaimed expert author, that are all from chapter one.

On Twitter, Whit Reynolds put out a challenge: Describe yourself like a male author would. And the responses were way better than the original author’s attempt.

Her breasts entered the room before her far less interesting face, decidedly maternal hips and rounded thighs. He found her voice unpleasantly audible. As his gaze dropped from her mouth (still talking!) to her cleavage, he wondered why feminists were so angry all the time. https://t.co/YtsZENYsgS

As round as she was loud, she immediately filled the room. My first thought was that I didnt want to fuck her. My second thought was even more disturbing, she didnt seem to care. She contemplated the roundness of her own boobs and contributed something to the meeting. I missed it https://t.co/1uTe0cKCaE

She was petite, exotic. Definitely Asian, but full Asian? What kind of Asian? I decided to approach her

Her lack of one breast due to cancer rendered her impossible to lust after, but she could get quite flirty after a few ales which rendered her attractive to a diminishing few

And let’s not ignore the fact that even when the author is supposedly writing a female protagonist, he still centers the male gaze — all “I could imagine what he saw in me” and “I could only imagine the thoughts that were running through his head.” It doesn’t count if you just write down all the stuff gross men say when a woman walks into a bar and then add “I knew what he saw.” It would be like if I wrote, “I knew what she saw. Ripped biceps (but not too ripped). Junk cupped by my boxer briefs into an enticing bulge that would make any woman want to take a closer look.”

You know how it is.