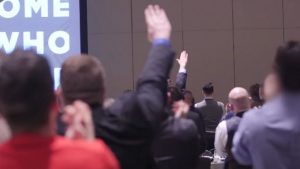 Lately, I’ve found myself dissociating just a little bit from time to time. Not in a scary way — just a noticeable one. The first time, I was driving, and someone on the radio said the words “President Elect Donald Trump,” and my brain stepped back a little bit and said, “No, that doesn’t sound like a real thing. It actually sounds like something out of some weird movie, so we’ll go with that,” and suddenly I was a character driving in a car, listening to the radio, in a movie wherein Donald Trump was the president elect. Pretty disconcerting, really.

More recently, it happened when I ran across these little jewels of journalism:

The fuck is wrong with y’all pic.twitter.com/MAgaVA5P78

(To the L.A. Times, Richard Spencer is “the up-and-coming intellectual voice of the movement,” and to Mother Jones, he’s a “dapper white nationalist.”)

Once again, my brain said, “That doesn’t look real. That looks like an article about a neo-Nazi in a respectable publication that treats him as benignly as some overyoung New York hedge fund exec with a particularly snappy fashion sense, and that’s not realistic, so I guess we’re back in the movie. What a sucky movie.” Except no, brain, this is real life.

Make no mistake: This is not because I’m in some way surprised that this kind of bigotry exists. Its existence, while dismaying, is nothing new. What’s putting my brain on the fritz is that it’s become so normalized so very quickly. It’s like the media has become sensitive to Trump’s petulant claims of unfairness and is responding with a program of forced neutrality and false equivalence. Or maybe they’ve just spent so much time treating these people like a harmless fringe group that now they’re embarrassed to acknowledge the truth. They’re willing to call a hate crime a hate crime when it’s spray painted onto a church, but when white supremacy is eating togarashi-crusted ahi with chopsticks — or conversing with Trump over the desk in the Oval Office — suddenly they’re moving cautiously.

It’s not like Trump himself is the patron saint of humanitarianism (despite being, according to himself, “the least racist person you’ve ever met.” Even without going back to his federal housing discrimination suit in the ‘70s, we can look at his Obama birtherism and attitude toward Latinos, black people, Jewish people, Muslims, and many others to see that you might actually have met some people who are less racist than he is. (And none of this is to mention his white-supremacist-retweeting son or his Nazi-propagandizing bud Nigel.) While his unique brand of least-racism was a talking point throughout the campaign, it’s something that’s been rather soft-pedaled in recent coverage of his white supremacist cabinet choices. And that’s something to be concerned about — one of the biggest dangers of Trump’s impending presidency is that he can still put forward some terrifically horrible policy that looks reasonable in comparison to the over-the-top institutional bigotry he proposed as part of his campaign. Compared to being run over by a bus, being hit by a car sounds great — but make no mistake that you’ve just been hit by a damn car.

Every one of Trump’s early appointees is, historically and with supporting documents, racist as hell. Alabama Senator Jeff Sessions, future Attorney General (assuming his appointment clears the incoming GOP-dominated Senate, which it almost certainly will) is on record as referring to the Voting Rights Act as “a piece of intrusive legislation” and said that a white lawyer who represented black clients might be “a disgrace to his race.” Prospective CIA director and waterboarding enthusiast Mike Pompeo has said that Muslim leaders across the country were complicit in the Boston Marathon bombings. Former Lt. Gen. Michael Flynn, future National Security Advisor, is deeply and openly Islamophobic, calling Islam a “political ideology” that has “metastasized” into a “malignant cancer.” (He once tweeted that “fear of Muslims is RATIONAL,” shouty caps his; no wonder Trump was drawn to him.)

But the one ring that binds them all in the darkness is, of course, Steve Bannon, campaign CEO during Trump’s candidacy, now to be chief strategist during his presidency — an appointment not subject to Senate approval. Bannon was formerly an executive at Breitbart News, which he himself declared “the platform for the alt-right.” Under Bannon’s guidance, Breitbart published journalistic tours de force such as “Hoist it high and proud: The Confederate flag proclaims a glorious heritage” and “Paris streets turned into warzone by violent migrants.” (Those are far from the worst of them — apologies for the Breitbart Lite; I just can’t bring myself to put the full-hate version in a post.) His appointment has been praised by prominent white nationalists like Peter Brimelow and former KKK leader David Duke, who said that Bannon is “basically creating the ideological aspects of where we’re going.”

That’s the ideology that has the ear of our future president: openly racist, proudly anti-Semitic, and shielded by the term “alt-right” like it’s just a different way of being a Republican, like being a Tea Partier but with a more thorough grasp of world history. With literal neo-Nazis and Klansmen celebrating its rise and its representation in Trump’s administration, it enjoys the legitimacy of reasoned debate and cautious language, as if it weren’t an ideological pipe bomb waiting to tear our system of government to shreds.

Last week, Spencer — who claims to have personally coined the term “alt-right” — spoke to an “alt-right” gathering of followers at a conference in D.C. During his speech, per the New York Times, he “railed against Jews and, with a smile, quoted Nazi propaganda in the original German,” and ended with a call of “Hail Trump! Hail our people! Hail victory!” that was answered with Nazi salutes and “Sieg Heil!” The article mentions that the gathering was full of Nazi ideology, Nazi language, and Nazi salutes, but stops short of actually calling them Nazis because apparently looking like a duck, quacking like a duck, and leaving duck shit all over the place still leaves room for debate about duckiness.

To Salon, he’s just a member of “a new group of far-right intellectuals.” (He “explicitly reject[s] the notion of racial supremacy,” says the author, preferring to focus on white nationalism, which is of course totes different.) When he was the topic of discussion on CNN’s “The Lead with Jake Tapper,” a lower-third graphic noted, “Alt-right founder questions if Jews are people.” (The two correspondents in the segment did take a strong anti-Spencer stance, even if CNN’s chyron remained decidedly neutral.)

When Bannon’s appointment was first announced, the New York Times tactfully headlined that “Critics See Steve Bannon, Trump’s Pick for Strategist, as a Voice of Racism” — as if anything stronger about the man who published “Bill Kristol: Republican spoiler, renegade Jew” would be too hard a line. Every woman who’s ever been called a “feminazi” can appreciate the irony of the delicate hand the media is taking with actual Nazis.

This is the world that my brain refuses to accept: not one in which this kind of hatred exists, grows, and spreads largely unopposed, but a world in which a crowd of “Sieg Heil”-ing, Nazi-saluting white supremacists is described by the Gray Lady as “a hundred chest-thumping metrosexuals.” We commonly say that racism is insidious, that people are reluctant to call it what it is because it appears more subtly than a Southern Cross or a spray-painted swastika. And while that’s still true, it’s now appearing more and more as those overt banners of white supremacy — salutes, symbols, dialogue straight out of ‘60s-era KKK propaganda. But somehow, that’s still not enough. Somehow, even with “Sieg Heil” ringing out through the ballroom of the Ronald Reagan Building and International Trade Center, the media is still discussing neo-Nazis like they’re a particularly enthusiastic branch of Young Republicans. Faced with that new reality, my brain prefers to spare me by removing me into some dystopian thriller in which things are going to get worse before they get better, but we’ll ultimately emerge dusty, bloodied, but victorious as the John Williams score swells. (My brain movies are scored by John Williams.)

Unfortunately, as you might have noticed, this isn’t actually a movie, we have no guaranteed happy ending, and when characters get killed, they’re not going to show up on the red carpet at the premiere. There’s no Indiana Jones here — there’s just us. And whatever we can do, or want to do, or are afraid we can’t do, it starts with doing away with this euphemistic “alt-right” bullshit and speaking its name. Racism is racism. White supremacy is white supremacy, whether the bigotry is tattooed on their forehead or embossed on their business card. Godwin’s Law is hereby suspended, because when white supremacy is treated like a credible political standpoint just because it’s wearing a suit, the Nazis need to be the beginning, not the end, of the discussion.