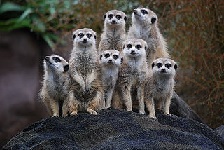 Meerkats feature for this week’s Open Thread. Please natter/chatter/vent/rant on anything* you like over this weekend and throughout the week.

So, what have you been up to? What would you rather be up to? What’s been awesome/awful?
Reading? Watching? Making? Meeting?
What has [insert awesome inspiration/fave fansquee/guilty pleasure/dastardly ne’er-do-well/threat to all civilised life on the planet du jour] been up to?

* Netiquette footnotes:
* There is no off-topic on the Weekly Open Thread, but consider whether your comment would be on-topic on any recent thread and thus better belongs there.
* If your comment touches on topics known to generally result in thread-jacking, you will be expected to take the discussion to #spillover instead of overshadowing the social/circuit-breaking aspects of this thread.

10 thoughts on Open Thread with Meerkats