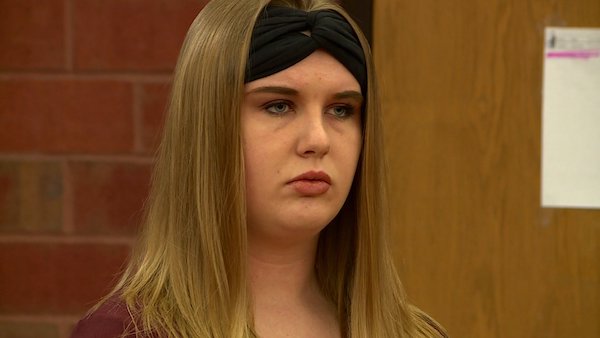 Brianna Brochu, who was expelled from the University of Hartford after contaminating her roommate’s belongings with bodily fluids, has had her day in court. The verdict? Guilty of breach of peace and criminal mischief. The sentence? Two hundred hours of community service, and if she’s a good girl, her charges will be thrown out and she won’t have a criminal record for rubbing used tampons on her roommate’s backpack and (as she claimed on social media but later denied to police) sticking her roommate’s toothbrush up her ass.

Brochu’s offenses, as admitted to, included licking Rowe’s eating utensils and rubbing used tampons on her backpack. In an Instagram post, she also gave claim to spitting in her coconut oil, putting moldy clam dip in her lotion, shoving her toothbrush up Brochu’s ass, “and so much more,” although she told police that she was lying to “appear funny.” And while those bodily fluids could, and ostensibly did, cause her victim illness, apparently the worst thing about it was how mischievous and unpeaceful it was.

Brochu’s victim, former roommate Chennell “Jazzy” Rowe, who is black, generously didn’t object to the request for “accelerated rehabilitation,” although she would have been fully within her rights to demand that Brochu, who is white, carry around that record forever and have to explain her disgusting actions to every employer ever to interview her ever. Despite there being no reason that she should be expected to take anything even resembling a high road, Rowe said, “By giving her this second chance, I hope she will change her ways and finds love for all mankind no matter what race.”

On Facebook, Rowe described, in detail, how she became persistently sick as her roommate systematically contaminated her belongings with bodily fluids.

“While I’ve been here, I’ve been getting sick. Not knowing why I’ve been getting sick. It started with throat pain. I thought maybe because it’s colder up here, I’m just probably catching a cold,” Rowe revealed in a Facebook video detailing the ordeal. “The sore throat pain got worse and it was just throat pain. And this was happening for about a month. It got to the point where I had extreme throat pain where I couldn’t sleep, to the point where I couldn’t speak. Like, I’d try to whisper and I could barely whisper.”

Brochu’s lawyer, Thomas Stevens, assured us that Brochu was totally kicking herself for… communicating poorly and getting angry.

Stevens said Brochu is angry with herself for letting communication with Rowe break down and for reacting in anger to a perceived slight.

Not included: Brochu is angry with herself for rubbing used tampons on her roommate’s belongings.

He also said that she totally wouldn’t have smeared Rowe’s belongings with biological contaminants if she had known… she’d get death threats.

“With the consequences she has endured … death threats .. she knows she made a mistake,” Steven said.

Not included: It didn’t take death threats for Brochu to realize that rubbing the lining of her uterus on her roommate’s backpack was fucking wrong.

While Brochu did refer to Rowe in her Instagram post as “Jamaican Barbie,” State’s Attorney Gail Hardy said that the authorities thoroughly investigated witness statements and Brochu’s social media and didn’t find any evidence of racism. So any charges or penalties beyond the ones applied would be “personal,” “political,” and “vindictive.”

Not included: But we do take seriously the physical and emotional well-being of a woman who became significantly and unrelentingly ill after her belongings were contaminated with biohazardous substances.

For her part, Brochu swears she isn’t racist.

Brochu recently told The Republican-American newspaper that she had acted foolishly but isn’t racist.

“I think that when it’s all said and done, what you’re going to see is that there was nothing racist that motivated this,” he said outside the courthouse. “These were two students who were placed together … who didn’t like each other … and it escalated.”

But hey, this is going to live forever on the Internet. And in the end, isn’t that the worst punishment of all?

And the price Brochu pays for her conduct will last long after her court case ends, Williams said. Friends, potential employers and even potential romantic partners will learn of Brochu’s conduct with a simple internet search, the judge said. Even her own children might one day learn about their mother’s misconduct.

Life will be way hard because people might not want to hang out with her once they find out she assailed a woman with spit and blood and, by her own original claims, rancid clams and ass bacteria. Poor, poor, foul, disgusting Brianna Brochu. My heart breaks for her. Or maybe that’s just the E. coli.

7 thoughts on Student who smeared bodily fluids on her roommate’s belongings gets special probation. Not included: Any other meaningful penalty.