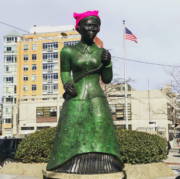 Someone put a Pussyhat on Harriet Tubman.

It was the memorial to in Harlem, the one with the roots of slavery trying to hold her back as she strides determinedly toward freedom, and someone knitted a Harriet-Tubman-statue-sized pink Pussyhat and then put it on her.

No one, to my knowledge, knows this person’s motivations. Maybe they were trying to be cute. Maybe they felt that were Harriet Tubman still alive today, she’d be wearing a Pussyhat and marching in the march. Maybe it’s an attempted show of solidarity, reaching back through the centuries to show that we are all one in our struggles or something or whatever. Maybe they felt a strong emotional connection to their own hat and felt that this was leaving a tribute to Tubman. Maybe they believed themselves to be a modern-day Harriet Tubman in their pink-hatted daylight march past a total of seven Starbuckses and felt that they should both have Pussyhats. I don’t even know.

Don’t put a cutesy pink hat on the enslaved woman who ventured back into the South 19 times to guide more than 300 other slaves to freedom all while being a cook, a nurse, a spy, and a gun-toting badass.

I get that you love your hat. For a lot of women, it feels empowering — it’s a reminder of a very special time when women all came together in a truly spectacular way. If wearing your hat makes you feel strong, makes you remember that day that you marched side by spiritual side with five million women around the entire world, I’m sincerely happy for you. It’s powerful to have something like that. (And hey, Pussyhats made it into Missoni’s runway show for Fall 2017, so you know your empowerment is tres chic.)

But not everyone feels that way, about the hats or, for that matter, the march. Trans women have said that the hats, and accompanying pussy-centric messaging, make them feel excluded because their lack of pussies has been a source of oppression for them by feminists. Black women have said that the hats are a symbol of a march and a movement that excludes them — a march organized in part by women of color and that then forgot about them, ignored them, shouted over them, and appropriated their history of oppression. A pink Pussyhat on Harriet Tubman is pretty much the sartorial equivalent of white feminists yelling, “Ooh, we want this one, too!”

Considering that mainstream feminism has been centering white women at the expense of everyone else since before Susan B. Anthony back-burnered black suffrage because it should be given to “the most intelligent first” and black women were pushed to the back of the Women’s Suffrage Parade, maybe don’t — even if you mean well, y’all, even if you’re trying to be nice — put a Pussyhat on Harriet Tubman.

An attempt to vest a nineteenth-century radical black woman with the accoutrement of twenty-first century mainstream white feminism misses the mark by evoking a false comparison. The statue of Tubman depicts her in the act of one of her several emancipatory journeys. In her dress we see embedded the faces of enslaved people she helped to free, at personal risk to herself. Behind her are the “roots of slavery” attempting to drag her back. Women’s March attendees generally occupy a place that is safe enough that they voluntarily bring their children with them. The vast majority of participants (myself included) are privileged in one or more ways, and extremely so by comparison. While not explicit, the image brings up the comparison of white women’s oppression to slavery — an argument resurrected from white liberalism’s antislavery past. Then and now, the too-easy comparison of Tubman’s struggle to that of free white women elides black women’s presence and activism.

Demetria Irwin, Why a white woman was dead wrong for defiling Harriet Tubman statue with a ‘pink pussy hat’ in Harlem:

Tubman was a true freedom fighter. Her objective was to get Black people free and she dedicated her life and her own liberty to that singular goal. The pink pussy hat brigade is a feminist lite reaction to real problems. Donning a stupid hat, retweeting a clever quip, and marching once a year does not make one a freedom fighter.

To put that piece of zeitgeist garbage on the head of a legend is profoundly disrespectful and shows a lack of understanding about intersectionality. Putting a hat on Tubman does not link these movements. It does not bring Black women into this fight.

“The pink pussy hat reduces contemporary social justice struggles to a very narrow vision of who and what people are fighting for in 2018,” Lindsey explains. “Symbolically, it centers white cisgender women. Most of these women were nowhere to be found at Black Lives Matter Marches or for undocumented people or for workers fighting for a living wage. The hat, for many, represents a continuation of a historical pattern in which white women center themselves and co-opt movements and justice work of more vulnerable groups.”

TL;DR – Harriet Tubman didn’t traverse the woods of this country with a shotgun and the slave catcher at her back TO BE DISRESPECTED WITH YOUR STUPID HAT

2 thoughts on Y’all, Don’t Do This: Put a Pussyhat on Harriet Tubman