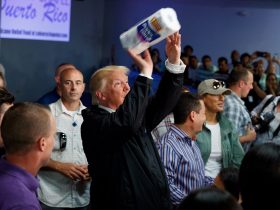 Nearly two weeks after Hurricane Maria ravaged Puerto Rico and the Virgin Islands, Trump made the trek across great big water for a four-hour meet-and-greet and photo op with civic leaders and storm victims. The man is an embarrassment on a good day, but this trip was gruesome even by Trumpian standards. Here are ten moments that could boggle the mind of even the most jaded Trump observer.

What even the fuck

When he reminded the survivors about how much of a hassle it was to help them.

“I hate to tell you, Puerto Rico, but you’ve thrown our budget a little out of whack because we’ve spent a lot of money on Puerto Rico. And that’s fine. We’ve saved a lot of lives.”

“You sure screwed things up on the financial side of things, I’ll tell you. Nice going, getting devastated by a hurricane. Great job. I mean, we’re cool with it, because we’re awesome and doing a great job, but I’m just saying.” For the accountants scoring at home, these people’s budget is zero dollars, because the island itself is out of money — not just broke, but literally bereft of cash. Quit whining about your economic burden to people who can’t afford food.

And I want to make a point here: In 2011, Jefferson County, Alabama, filed for the biggest municipal bankruptcy in U.S. history, with $3.14 billion in debt due to bankruptcy and corruption. (When the state of Alabama goes, we go big. Rammer Jammer.) Now, I’ll admit that it’s a mere percentage of Puerto Rico’s $7.3 billion debt, but it still raised concerns about the potential impact to the U.S. municipal bond market. Nonetheless, I think we can all agree that if Birmingham were to be devastated by a national disaster during that period of insolvency, Trump wouldn’t be pissing and moaning about the cost of recovery on account of Birmingham can’t pay their fair share.

Most of all, even if that is something you have to be dealing with behind the scenes, you don’t bring it up publicly and try to make a devastated community feel guilty after an entire ICU of people died for lack of power. There is nothing whatsoever that those people can do about Puerto Rico’s debt. Don’t be an asshole.

When he just walked the hell away from the mayor of San Juan.

The fun starts at 1:23 in the video. They greet each other and shake hands, she notes politely (and accurately) that this isn’t about politics but about saving lives, and he just turns and walks right off. She didn’t insult him, she didn’t complain about anything — it could even be speculated that she was trying to defuse the situation by saying that it wasn’t anything personal — but off he fucked. My guess is that he only agreed to meet with her because he thought she was going to apologize for being an ungrateful bitch and pay him the homage he deserves, and when it became apparent that she wasn’t going to do that, he didn’t want to be there.

When he passed out paper towels like he was passing out t-shirts at a basketball game.

There’s video of Trump shooting paper towels into the crowd and it does not disappoint pic.twitter.com/KPfJ1AeAqk

As he addressed a crowd of hurricane survivors gathered in wait for food and batteries and flashlights and such, Trump started chucking rolls of paper towels into the crowd like they were red hats and he was at a rally. (Note: We have no confirmation that he didn’t actually think he was at a rally and wasn’t confused that the paper towels didn’t say MAGA.) As if the need to stand in line for basic supplies to feed their family wasn’t demoralizing enough, now he had disaster victims reaching up to snag supplies like bridesmaids going after the bouquet. And you know he was seriously disappointed when his team vetoed the t-shirt cannon.

(What’s great about this angle is that you can see the guy toward the top right who keeps catching paper towels and chucking them to other people, because fuck some paper towels.)

When he said that this disaster wasn’t a big deal because not enough peopled died.

“Every death is a horror, but if you look at a real catastrophe like Katrina, and you look at the tremendous — hundreds and hundreds and hundreds of people that died, and you look at what happened here, with really a storm that was just totally overpowering, nobody’s ever seen anything like this. What is your death count as of this moment? Seventeen? Sixteen people certified, 16 people versus in the thousands. You can be very proud of all of your people and all of our people working together. Sixteen versus literally thousands of people. You can be very proud. Everybody around this table and everybody watching can really be very proud of what’s taken place in Puerto Rico.”

Yes, Katrina was a catastrophe, but Maria was NBD because only 34 people have died, at current count, which will probably increase as aid workers reach remote areas of the island that have had essentially no contact, which Trump almost certainly doesn’t know exist. What are you even whining about, Puerto Rico? Why are we even bothering to help you? Come back when your death toll cracks the triple digits.

When he complimented Puerto Rico on its weather.

“It’s a great trip. Your weather is second to none, but every once in a while you get hit. And you really got hit.”

Gosh, it’s good to hear you’re having a swell time, Mr. Prez. And it’s nice that the weather held up for you. Fun fact: 3.4 million people on the island recently got their lives blown away by weather. You know, one of those every-once-in-a-whiles when you get hit. But it’s good that people are getting to enjoy the abundant sunshine as they wait in line for potable water or disembark from their 747 or whatever they’re up to today.

When he told a guy to have a good time.

SURVIVOR. So we have a good house, thank God.
TRUMP. In the meantime, here you are, right?
S. Exactly, exactly.
T. We’re going to help you out.
S. Thank you.
T. Have a good time.

Hey, the guy just said his house didn’t collapse during the hurricane! I mean, he still doesn’t have electricity or running water or anything, but there’s still no reason not to have a good time in that house.

When he couldn’t figure out why they needed flashlights.

Because 90 percent of the island is still without power, you halfwit. He loves to congratulate himself about how great and comprehensive the disaster response has been, and I guess he sincerely believes that it’s more or less finished and everyone in Puerto Rico is living in the lap of relative luxury. Either that, or he thinks the entire island will be lit at night with the glow of his shining presence and flashlights will be unnecessary.

When he was mystified by water purification tablets.

In Puerto Rico visit, Trump was introduced to water purification for storm victims. This exchange is quite something https://t.co/KiV4B6yPfv pic.twitter.com/3Z3TN4HTua

No, she’s going to go without water until FEMA brings her a Dasani because stream water is super gross. Yes, you sheltered, self-involved nincompoop, she’ll drink it. When your only source of water is a stream — particularly a stream that’s also used for bathing and cleaning — purified water is all you have to drink. They can’t turn their nose up at purified stream water, because then they will have no water, and then they will die, because people die without water. I can understand that a man who only drinks Coke delivered by a butler at the push of a button dedicated exclusively to summoning a butler with a Coke might be confused by this fact, but that person should not be allowed to interact with people who are thanking God that they have water purification tablets at all.

The only solution — the only solution — to Trump’s dipshittery when dealing with any member of the public with a net worth of below $10 million is to create an LMD controlled remotely by a staffer who knows what a Chipotle looks like from the inside. Every visit he makes, whether it’s to a rally or to a disaster site, turns into a self-celebration of his awesomeness. He’s completely incapable of centering anyone but himself, so what’s the point of sending him there at all? The White House would be just as well served sending an android — although they’d definitely be found out the moment that robot wasn’t an asshole to people in crisis.

Bonus “Commander in… Whatever” WTFery

When he didn’t know the difference between the Coast Guard and the Air Force.

TRUMP: And can we also mention some people that I really got to know and respect even more in Texas, and that’s the Coast Guard?

Would you like to say something on behalf of your men and women?

“No, yeah, I totally knew that. I was just, like, I didn’t say what branch you were from, but I knew it was the Air Force. Which, if you think about it, guards the coast between the sky and outer space, so it wouldn’t be that wrong anyway. But I knew that.”

When he said that the Air Force (which is not the Coast Guard) has invisible planes.

TRUMP. Amazing job. Amazing job. So amazing that we’re ordering hundreds of millions of dollars’ worth of new airplanes for the Air Force, especially the F-35. Do you like the F-35?

This could really go one of two ways: One, he could be one of those people who uses “literally” to mean “figuratively,” which should be punishable by a seven-year indenture to Kim Kardashian. Alternately, he might actually think that the Air Force has developed Wonder Woman technology such that the F-35 literally cannot be seen. Which… I… I don’t… Plus, the F-35 sucks. Either way, unless a squadron of F-35s are going to be swooping in stealthily to drop off aid and aid workers, a visit to see the victims of a storm-ravaged island is not the place to sing the praises of a completely unrelated plane that isn’t invisible and can’t be flown in the rain. Particularly after telling the people of Puerto Rico — several times — that it’s just too expensive to help them rebuild.

Our president is an idiot, is my point. A thoughtless, callous, ignorant, sheltered, narcissistic idiot. Anyone would be better than him. Literally anyone. Kim Kardashian for President. Sometimes she can’t even, but our current president never can. Kim K 2020: Sometimes She Can Even. Alternate candidates? Anybody but this fuckwit.