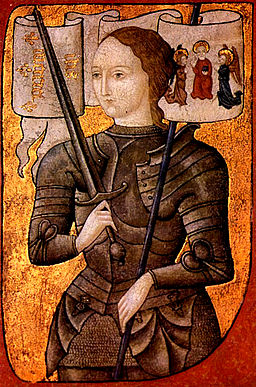 Re-examining Monica, Marcia, Tonya and Anita, the ‘scandalous’ women of the ’90s: you remember – those various stories involving women who were actually scandalously abused by people they trusted and were then exploited by gargantuan media frenzies which painted the women themselves rather than their abusers (or the gossips masquerading as journalists) as the “scandalous” persons in the narrative. Relentlessly scurrilous media scrutiny was spun as these women gaming the media instead of the other way around; as if they were gaining power/money/influence because of all the public attention, when in reality that attention meant they had almost zero control over how their stories were being told.

All these women confronted us with truths we did not want to consider, and so we terrorized them, mocked them, abused them, and rendered them finally voiceless. That was how terrified we were of listening to what they had to say.

My choice of Joan of Arc for this post’s featured image is a reminder that this sort of crap has been flung at women in the public eye for a very very long time (and she was hardly the first notable women to be mocked/damned for how other people exploited her). In an election year which has just become even more polarised than previously due to differences of opinion regarding exactly who is throwing around any “womancard”, this article raises some extremely important questions about what today’s media and their audience (us) are and are not doing differently from what went down in the 90s.

3 thoughts on Today in Required Reading: Lessons from scandals of the 90s