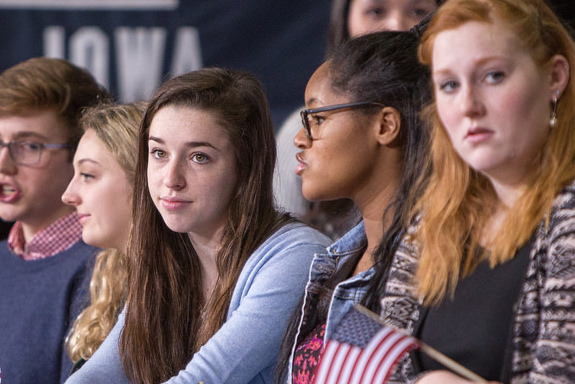 News right now is discussing a comment by Gloria Steinem — not so much one that she made, but more one that she made apologizing for the first one that she made. The first one happened Friday during an appearance on Real Time with Bill Maher (available in full here; the pertinent part stars at 2:43) during which she made an as-yet-unexplained comment appearing to imply that young women support Bernie Sanders in order to get boys.

I think it’s only fair to provide the quote in its entire, just a tad bit lengthy context, because for one, she does say a lot of positive things about young women becoming more involved in feminism and activism. But then this comment comes in entirely out of left field, and there was no tricky editing that made it sound like anything other than it was — it was just there, without explanation, even when she was given an opening to do so.

Maher. There are people, among them Debbie Wasserman Schultz, who have said that the younger generation of women are very complacent about Roe vs. Wade, that they weren’t around before, and they don’t have an appreciation. Do you think that’s right?

Steinem. You know, I don’t think so. I mean, I find the young women very, very activist, and they’re way, way more feminist, and, you know, feminist than — we were like twelve crazy ladies in the beginning, now it’s the majority. But I do think that gratitude never radicalized anybody. You know. I mean, I did not say, “Thank you for the vote.” I got mad on the basis of what was happening to me. And I think that that’s true of young women, too. So they’re mad as hell because they’re graduating in debt, and they’re going to earn a million dollars less over their lifetime to pay it back. You know, they’re mad about what’s happening to them.

Maher. They really don’t like Hillary, though. What do you think that’s about there? “Mom likes her so I have to…” You know.

Steinem. First of all, I mean, she does have a huge gender gap and race gap. I mean —

Steinem. Yeah, women are more for them than men are, and she has the black —

Maher. But not younger women. They’re more for Bernie.

.Steinem. It depends where you ask, but I do think that Bernie —

Steinem. It doesn’t — I mean, first of all, women just get more radical as we get older, because we experience —

Steinem. Yeah. It’s the opposite of men. I don’t mean to overgeneralize. I’m sure that you’re getting more radical. But men tend to get more conservative because they gain power as they age, and women get more radical because they lose power as they age. So it’s kind of not fair to measure most women by the standard of most men, because they’re going to get more activist as they grow older. And when you’re young, you’re thinking, you know, where are the boys, the boys are with Bernie, or, you know…

Steinem.No, but it’s not — No, I wouldn’t. I wouldn’t, because the boys are saying whether — No. Because, I mean, hello? How well do you know me?

Maher. Not that well.

If anyone has other interpretations, please drop them in comments.

Regardless, it’s a statement that Steinem needed to walk back, and she agrees, because she did exactly that, posting Sunday on Facebook that her quote was “misinterpreted.”

In a case of talk-show Interruptus, I misspoke on the Bill Maher show recently, and apologize for what’s been misinterpreted as implying young women aren’t serious in their politics. What I had just said on the same show was the opposite: young women are active, mad as hell about what’s happening to them, graduating in debt, but averaging a million dollars less over their lifetimes to pay it back. Whether they gravitate to Bernie or Hillary, young women are activist and feminist in greater numbers than ever before.

It’s absolutely true that, as noted above, the beginning of her statement did applaud young women for their involvement in activism and electoral politics. But then she came in with the “boys” comment, and the reason I’m finding it hard to let that go is that she still hasn’t explained where the hell it came from. Talking about young women following “the boys” isn’t implying that they’re not engaged in activism — it’s implying that they’re shallow boy-chasers whose engagement are driven and steered by their pursuit of the opposite sex. It’s insulting, it’s heterocentric, and it had to have come from somewhere. I’m not going to get all I demand explication! about it, but I’d like to know what she meant by it, and I don’t think the comment can’t be accepted as fully walked-back until she addresses that part of it directly.