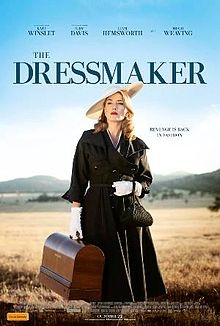 Share your thumbs-ups and thumbs-downs here, for whatever production and whoever’s performance, and feel free to go to town with subtext and meta-commentary, especially the marginalisation of movies centring people of colour yet again amongst the Oscar contenders. Just please be spoiler-aware for those readers who haven’t managed to catch up with various books/movies/TV yet.

I hear this IMO excellent Australian film, starring Kate Winslet, Hugo Weaving, Judy Davis, Liam Hemsworth and an eccentric small town’s worth of many of Australia’s finest comedic and dramatic actors, hasn’t been getting much buzz in the US. That’s a shame. If you are lucky enough to be near one of the (allegedly) relatively few cinemas showing it over there, please consider going to see it. If you love sweeping cinematography of Australia’s wide brown land with characters pondering justice and revenge while wearing killer frocks in the middle of a town full of secrets, teetering on the razor edge separating comedy and tragedy, then this is the sort of film you will probably adore. If you’re not fond of films that mix and shift genres frequently, this might not be the film for you (it starts out PG Wodehouse meets Dimboola, then frankly rides a roller-coaster that’s hard to describe, although director Jocelyn Moorehouse went with “Clint Eastwood’s Unforgiven with a sewing machine.”).

There’s an official trailer that in my opinion doesn’t give strong enough teasers for most of what I’ve just described above. That could well be one reason it hasn’t had quite the box office it deserves, and why it probably won’t garner nominations for many awards outside Australia (not even for costume design, which is just criminal). It’s also a movie where the two lead characters are women, at least half the conversations are between female characters, based on a book written by a woman, with a large roster of women working behind the camera. That may well be why even the minor female characters felt so compellingly relatable, embodying so many different aspects of women I’ve known for both good and bad over the years.

Sis and I are planning to have our regular lunches near a cinema for the next month or so, in order to take advantage of both their air-conditioning while it’s so hot here and a pleasing range of women-centred movies that are around at the moment. I also have a bunch of new music to listen to and should read some new books. How about you?