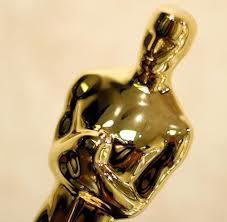 “For those of us in the audience who are still foolishly clinging to the idea that female films with women at the center are niche experiences,” Cate Blanchett chided in her Oscar acceptance speech, “they are not. Audiences want to see them, and in fact, they earn money. The world is round, people.”

These are the numbers: Male-centered films are more likely to win the Academy Award for Best Picture; only one woman has won the award for Direction; Oscar-nominated actors record more screen time than Oscar-nominated actresses (among this year’s nominees, lead actors averaged 85 minutes on-screen to lead actresses’ 57, which was nonetheless an improvement from last year’s 100 minutes to 49); this year, lead actors collectively earned two-and-a-half times their female counterparts (the highest-paid actors raked in $456 million, while the highest-paid actresses banked $181 million).

There is more subjectivity to Hollywood sexism, though, than a numbers game – and perhaps the more uncomfortable observations lie in an examination of female roles. At the Golden Globes, Amy Adams thanked American Hustle writer/director David O. Russell for writing “such strong roles for women” – but it is exactly Adams Sydney Prosser (with her 46 minutes of screen time to Christian Bale’s 60, for the record), with her shaky vulnerability and exploitative sexuality, that helps to define and perpetuate the notion of the modern female lead as little more than a mere accessory. The problem here is two-fold, and the first we should get out of the way at the outset: Simply because a woman is a lead does not mean that she is the lead, i.e. the protagonist. This is an important distinction. Oscar-winning women are more likely to receive their Best Actress in a Lead Role awards for having been leads in nonetheless supporting capacities – as wives, girlfriends, sisters, or daughters – while Best Actor winners are more likely to win for having been the stars of their own stories (Daniel Day Lewis as Abraham Lincoln in Lincoln; Sean Penn as Harvey Milk in Milk; Philip Seymour Hoffman as Truman Capote in Capote). Admittedly, this statistic has shifted in recent years (in 2011, Meryl Streep won her second Oscar for her portrayal of Margaret Thatcher in The Iron Lady; in 2006, Helen Mirren won for her title role in The Queen), and this year, three of the five best actresses nominees were also the protagonists of their respective films (Cate Blanchett in Blue Jasmine, Sandra Bullock in Gravity, and Judi Dench in Philomena) – but it was just last year that Jennifer Lawrence won for her role as Tiffany Maxwell in Silver Linings Playbook: A recent widow whose mania and neuroses may or may not be a result of overwhelming grief, Lawrence’s character exists to inform the growth of the film’s true protagonist (Bradley Cooper as Pat Solitano). We conflate “lead” with “hero”, and the two are not necessarily synonymous.

The second problem lies with Amy Adams’ use of the word “strength”. What do we mean when we define a female character as “strong”? If “strong” is a reference to force (some kind of on-screen dominance), we should be more critical of characters whose presence swells from stereotypically female crises; if “strong” is a reference to moral fiber – to strength of character as in nature – then we should be more critical of characters who find strength out of stereotypically female challenges. When an actress is the protagonist, her conflict is decidedly different than the average male protagonist’s: In literary terms, we often see the female protagonist engaged in a “man vs. self” struggle, while male protagonists wrestle with outside forces. In 2008, Anne Hathway earned her first Oscar nomination for her role as a young woman battle addiction in Rachel Getting Married; in 2009, Carey Mulligan was nominated for Best Actress for her role as a cripplingly self-conscious and naïve co-ed in An Education; in 2010, Natalie Portman won for her portrayal of a ballerina battling a multitude of mental health disorders in Black Swan; in Blue Jasmine, Cate Blanchett’s title character seethes, “there’s only so much a person can stand before they take to the streets and start screaming!” – but the dramatic irony of the story lies in Jasmine’s conviction that it’s the world that is out to get her. Similar roles among male nominees are hard to find: There is Mickey Rourke in 2008 in the title role in The Wrestler; Jeff Bridges in 2009 for his demon-addled Otis “Bad” Blake in Crazy Heart; Bradley Cooper’s bipolar lead in 2012’s Silver Linings Playbook. The winners, though, are white men (often in historical roles) who struggle valiantly against outside forces: Matthew McConaughey toes legal lines to provide AIDS medication to the masses in Dallas Buyers Club (2013); Daniel Day Lewis fights slavery and civil war in Lincoln (2012); Jean Dujardin finds his talents are rendered obsolete as technological advances drop the curtain on silent film in The Artist (2011); Sean Penn fights for gay rights as Harvey Milk in Milk (2008). While men are secure in their identity and sure of their convictions, women are neurotic, addled, manic; dangerously sexual (Amy Adams in American Hustle), ambiguously sexual (Rooney Mara in The Girl with the Dragon Tattoo), self-consciously sexual (Michelle Williams in My Week with Marilyn), or struggling with their sexuality (Glenn Close in Albert Nobbs).

Life, of course, is messy, and it is art’s job to work out that chaos. None of this is to say that the stories mentioned here aren’t possible, plausible, or worth telling; certainly none of this is to say that the performances referenced aren’t outstanding. It is instead to wonder why we automatically conflate “lead” with “hero”; it is to question what we mean when we define a character as “strong”. It is a cliché to say that strength comes in all shapes and sizes: Certainly, Lisbeth Salander has strength as a rape survivor; Albert Nobbs has strength to live as a transgender man in 19th-century Ireland. As Amy Adams’ Sydney Prosser says, “we all do what we gotta do to survive”, and this gets at the complicated nature of the thing. The point is not at all that any one iteration of female “strength” is more admirable – more worthy of depiction on-screen – than another, but rather than our female characters consistently demonstrate one kind of strength while our male characters demonstrate another. Furthermore, when our female characters demonstrate stereotypically “male” strength – a kind of steely nerve and focused drive in the face of outside adversity, like Jessica Chastain’s CIA operative in Zero Dark Thirty or Sandra Bullock’s lost-in-space Ryan Stone in Gravity – they do not win the awards, which are again reserved for renditions of stereotypically-female hysteria (in these cases, Jennifer Lawrence in Silver Linings Playbook and Cate Blanchett in Blue Jasmine, respectively).

These complications of storytelling are all exacerbated by Hollywood demographics : Overwhelmingly white, and overwhelmingly male (94% of Academy voters are white, and 76% are male). It is men who hold both the production and voting power, and so it is men who dictate the lives of these women-centered stories from conception to red carpet (this year, of the three films featuring female protagonists – Blue Jasmine, Gravity, and Philomena – all were written and directed by men). What results, then, is a man’s interpretation of a woman’s perspective – something that is in the best cases resultant of simple gender difference and in the worst cases informed by problematic personal relationships with women. Woody Allen – the elephant in the room at this year’s Oscars, particularly during Blanchett’s speech – consistently creates women in his own likeness (neurotic, flaky, cripplingly self-deprecating), a narrative technique reflective of his own deeply troubling relationship with the opposite sex; Martin Scorsese made a movie this year that – while claiming to be satire – repeatedly reinforced archetypes paradigmatic to rape culture (The Wolf of Wall Street was directed by Scorsese, written by Terence Winter, and among the five producers there was just one woman). It is not only that we should critically assess the roles, but that we should also scrutinize the writers and directors that produce them.

The conversation is difficult to navigate – and this is before we even delve into issues of race (Halle Barry remains the only black woman to win a Best Actress statue) or sexuality (Jodie Foster won both of her Oscars before coming out, and for portrayals of straight women). When we talk about feminism today, the popular dialogue is one oriented around choice and accountability – a woman should have the freedom and right to choose the direction of her life, but we must be held accountable for the feminist implications of our decisions. The mantra should extend to show business, where as both producers and consumers we should collectively seek more diverse roles and representations of women on-screen, and we should be constantly aware of the ways current depictions perpetuate both the gender gap and gender stereotypes. It is a matter of wondering whose story we’re really telling.

26 thoughts on “Strength” of Character: How the Silver Screen Perpetuates Gender Stereotypes